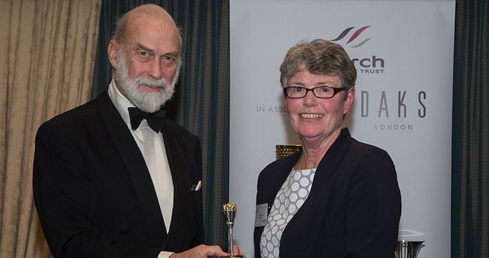 Swimming volunteer Jane Davies, who is manager of the ASA Swimming Management Group, was presented with the Torch Trophy Trust Award by Prince Michael of Kent.

The annual Torch Trophy Trust Awards, which were held on 3 March in London, recognise those who have dedicated themselves to volunteering in grassroots sports with clubs and community initiatives.

“It is a privilege and an honour to receive this award,” – Jane Davies

Jane was recognised for her ongoing dedication to swimming and her commitment to volunteering at all levels of the sport.

Over the next 10 years, Jane held a number of positions including Secretary of the Southern Junior League and Swimming Secretary for Hampshire County ASA. In these roles, she re-structured the age-group competition and raised the standard of swimming by bringing in tougher qualification times. Jane also introduced Development Meets to cater for those unable to qualify for the new standards.

Jane later became a member of the Southern Counties Swimming Committee and undertook roles such as Referee, Technical Director and Executive Director. She also officiated at both the Manchester 2002 and Glasgow 2014 Commonwealth Games.

Now chair of the swim21 South East Region Panel and the President of Portsmouth Northsea Swimming Club, Jane continues to provide vital help and support to clubs in her local area. Through her role as manager of the ASA Swimming Management Group, Jane is also responsible for Speed Swimming, Masters, Para-swimming and Open Water.

A PRIVELEGE AND AN HONOUR

Speaking after the Awards ceremony, Jane said: “It is a privilege and an honour to receive this Torch Trophy Trust Award.

“I am just one of many volunteers who give up their time week in and week out to help the sport. I have many colleagues who are equally deserving of this award so I would like to thank the ASA for recognising the work that I have done.

“Volunteering has given me a lot fantastic opportunities and I have made some lifelong friends along the way. I would encourage everybody to get involved with volunteering, not only is it incredibly rewarding but it’s also great fun!”

Steph Elliot, ASA Volunteer Engagement Manager, added: “Jane is a fantastic ambassador for aquatics. She is a hardworking, dedicated volunteer and her contribution to the sport is invaluable.

“Jane is passionate and knowledgeable about swimming and aquatics and is always ready to progress the sport in any way she can. Her warm hearted, honest and open approach makes her a worthy winner of the Torch Trophy Trust Award.”

The Torch Trophy Trust charity has been providing financial support and recognising volunteers across all sports since 1962. The organisations vision was, and still is, to recognise the outstanding achievements of the unsung heroes of sport – volunteers.